Location
Grand County is located in southeastern Utah and was originally named for the Colorado River, which at the time was known as the Grande River. Its county seat and largest city is Moab. As of 2000 the population was 8,485, and by 2005 it was estimated to be 8,743. 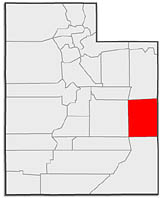 Composed mostly of sandstone and limestone, the plateau has been eroded by large rivers and other water and wind sources into huge canyons and other complex erosional forms that make it a rugged, but scenically spectacular, region. Arches National Park, a red rock wonderland containing the world’s largest concentration of sandstone arches, is located entirely within the boundaries of Grand County.
Property Taxes
County Projects
Bids & RFP's
Pay Online
Notify Me®
Employment
For Visitors
[]